I used to be a feminist

My mother was a feminist

She was young in the seventies and part of the hippie movement in Denmark. But mostly she was a freedom fighter, working against any constraint to her personal freedom, and she was a rebel. She liked to provoke people out of their skin. She was not a victim of being female, even though she was raised in the conservative 1950s. Mostly thanks to her rebellious personality, but also because of what happened in the world around her.

We are from Scandinavia. Women’s rights are on the top of any list. And I am thankful. Thankful for the fights they took. For the change in the culture. For the freedom, I can take for granted.

I remember, when I was young and single and pregnant with my first child – how it hit me, how it in the context of both history and different present cultures was extremely good to be Danish. I could raise a child as a single mother, and hardly anyone would lift an eyebrow. It was not the end of anything. It was no economic nor social catastrophe. It was a miracle, and it was a gift. It was a grandchild. It was my first daughter. And I was totally happy with the situation. No problem.

I was a fourth-generation single mother. Interestingly, my great-grandmother was let down by (presumably) a sailor. My grandmother was divorced in the 1950s (a rarity at the time, even in Denmark). My mother divorced my father in the 80s (not so much a rarity). And there I was with my child and no partner at the edge of the new millennium. In my case, it was a positive choice, and I was supported by the surrounding society as well as by my church, my family, my university, and my friends.

We are moving in the right direction, and we have to keep moving. Because we are not there yet. It takes a lot of force and a lot of time to turn the wheel of so many centuries of women’s oppression. 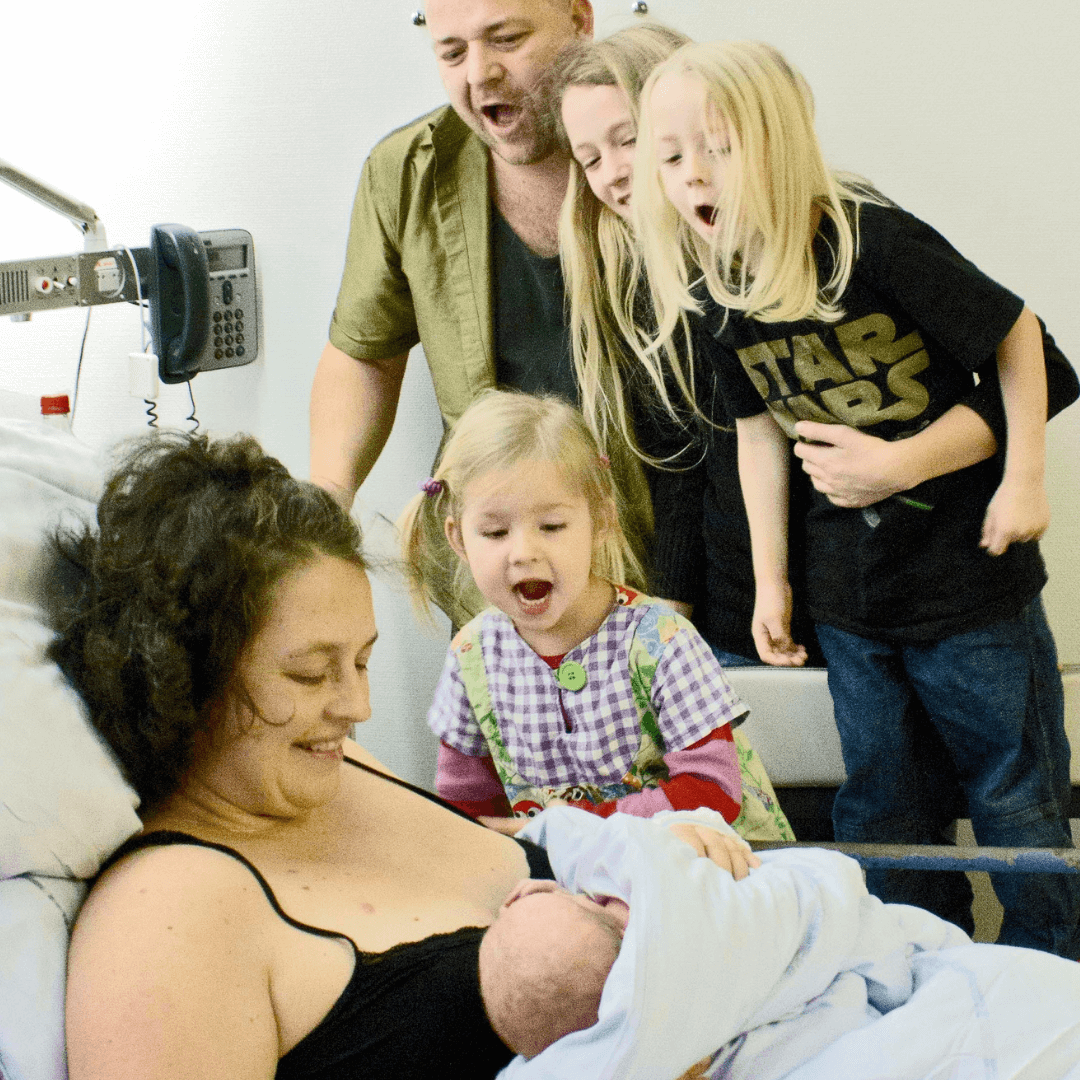 I used to be a feminist

I read all the books, had all of the conversations, was powerful and provocative.

I might still be a feminist. That depends on your point of view. Because something happened. Actually, some-one happened. Four of them.

My feminist mentors would frame it this way: I lost everything to motherhood. Everything I ever fought for as a feminist, everything all the feminists ever fought for.
And I strongly disagree. I believe in my right as a woman and mother to choose the life, I want for myself and my offspring.

I was attacked quite strongly by modern feminists, when I chose to stay at home and homeschool my children, they told me, I ruined their freedom because my choice of staying at home made them feel guilty for not doing it, therefore making it harder for them to make a career and achieve as much as if they had been men.

That left me speechless for a few years, while I was busy taking care of small kids and recovering from cancer. The same thing makes me talk today.

I believe strongly in personal freedom, in the dignity of all human beings, and in paying proper respect to anyone around you, including their struggle and their dreams. I also believe in making the path easier for mothers, slowing down the world, so it has room for children, relaxing the stress so there is space to feel, to be, to grow.

I believe in fathers too, for the record. I believe the new and better family life is a life within the family, together as a unit. I chose my children, and it took me years. Looking back I would have loved to do it from the very beginning. And I am afraid, that the feminist movement, the women’s rights movement, the schooling of everyone, and the equal rights movements have a downside, and that we are afraid to talk about. As I said, I was speechless for years.

But what about motherhood? What about the children? The equality culture of Scandinavia ridiculed me for choosing my children and my motherhood.

The crazy reality is, that the urge to liberate women, actually left me NOT FREE to make the choices I wanted for my life. And for my children. It took a lot of willpower, a lot of hard conversations, a lot of courage, to say no to making a career, and to stay home with the children.

Let’s make sure, the most important relations in life are not lost in the fight for equal rights for women.

I am very grateful for the rights the women before me have fought for and created for women everywhere – the fight is still needed in a lot of places. 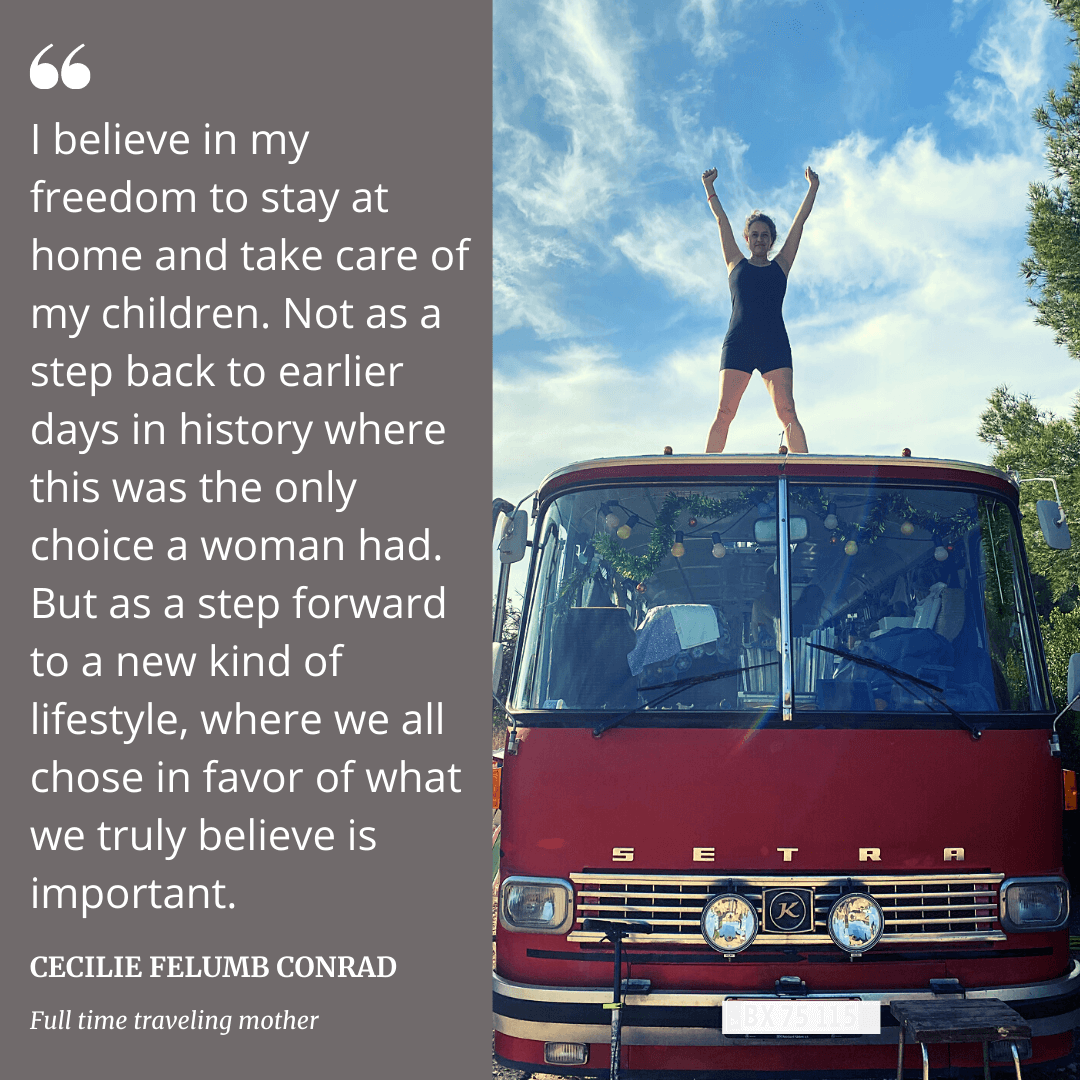 Yes. I would say so. In an imperfect way, I am exactly where I want to be. I have four children. I have a great husband. I have my personal freedom. I have enough money, and our economy is stable. I am in a good spot. I am grateful.

Buying a bus and starting to travel full time was a way out of our old life. A life that in no way was like our neighbors. We already lived alternatively and were very happy – but at the same time, we felt our life was too constrained, and my husband had to leave every day for work.

With our new nomadic life, we have found a lifestyle that suits us even better than before. We move with the sun and are now all together all day, all days. We live five people in one room. We are sharing almost everything, yet having our own things and projects going on.

My rights and position as a woman are intertwined with my viewpoint from here.

I believe in my freedom to stay at home and take care of my children, not as a step back to earlier days in history where this was the only choice a woman had, but as a step forward to a new kind of lifestyle, where we all chose in favor of what we truly believe is important. Where we share responsibility as well as hours. Where we work as a unit with what calls for us and where we walk in the direction our heart points to.

This takes a new kind of courage, and it builds upon the freedom fight and equality fight of the generations before us. I am truly grateful for where it has put us, as long as we can keep moving and as long as we realize, personal freedom for women is not freedom from motherhood, the most important relations in our life.

We have to find a new way of looking at this, so the equality of women does not force us to act like men, to walk backward in history and get the lifestyle and habits men used to have.

We need to find a new kind of life, a better balance for everyone. I believe in personal freedom for everyone. And in true and humble respect for the dignity in everyone. By everyone.

This would be a huge step forwards.

We are not here to judge.

May the sun shine on you.

Thank you for the beautiful text. I resonate with all that you said, and think in the same direction. Still being in my safe space with small kids, I don't talk much about my process, feelings and thinking about my right to live the life of freedom as a homeschooling mom that travels with her family. I would not change it. I am grateful that you are speaking about it openly. I am following you and your family on social media, and you are a great inspiration. Keep on with what you are doing. I believe there will be many more inspired by your life and freedom. So thank you again for your courage to be who you want to be despite everything else.

Here you can see the latest blogpost. Want more content? Just check the blog link in the menu :)

The secret to good planning

A conversation about world schooling

Chateau Jasmine and how to handle big dreams

Or sign up to our newsletter.
We rarely send emails and you can unsubscribe at any time.