How to get 3 kids to sleep at the same time

I received the following question on the blog with a beautiful complement. That's how this article was born.

"Our twenty-month-old son virtually decides himself when it's time to sleep (with a little guidance from us if he is overstimulated). People say, 'Yeah, that's fine, but you don't have four children and two jobs!' I remembered your post about sharing a bed with four children. I've reread it, but I am still curious about the details. Would you mind giving a more concrete example of how a typical evening looks in your house?"

Sure! Well, the evening routine. I'll try to be concrete, unostentatious, and direct. No thrills or great explanations.

Evening routines and time to sleep – who is in charge?

So, we wrap only three kids into bed. Storm is nearly ten, Silke is seven, and Fjord is almost four. The routine part of the evening starts with a meal. An extra meal. There is an hour or two after dinner. They have porridge, pancakes, or rice. Sometimes they watch some television while they eat, other times we talk or read stories. It's cozy. Usually, in the kitchen, it lasts around half an hour, depending on how hungry they are.

The adults decide the time for this meal. In that sense, it is us that decide it is nearly time for bed. But it isn't about morals, and we don't decide that they should sleep. But sometimes our strength is exhausted, so our tasks are objective; below this meal.

At the moment, it is usually around 9 pm or 9:30 pm when we reach this stage. In our experience, it is difficult for the kids to become overtired. So there is a definite correlation between when they wake up and when we start the evening process. We decide so far that we should sleep around the same time; otherwise, it would be impossible to get enough sleep. We have to synchronize our sleep.

Afterward, we tidy up while the kids brush their teeth, wash themselves, brush their hair, put some cream on or tend to any wounds, that kind of thing. There is a total routine around the body. 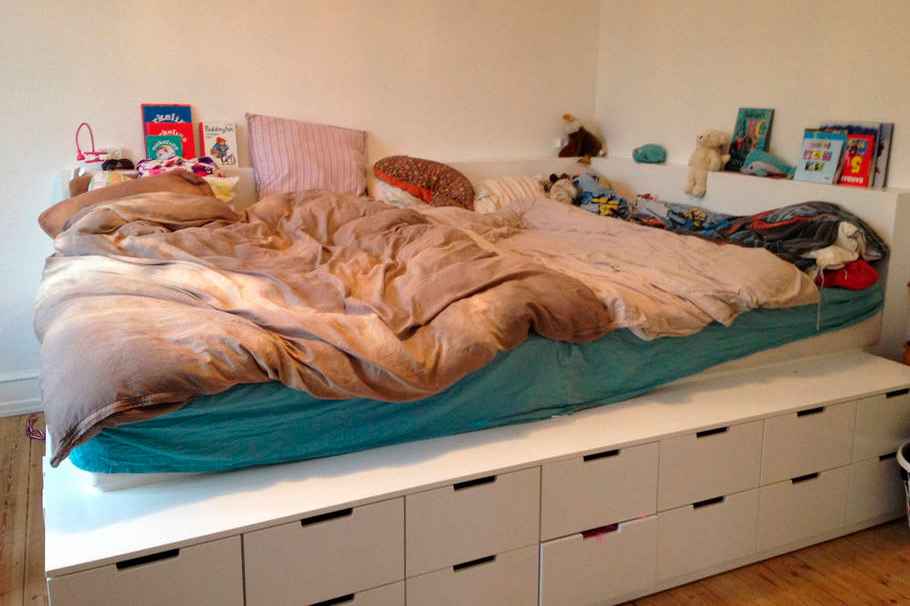 When you co-sleep it is wonderful to have a double-double bed :)

Everyone creeps to bed. There is, in principle, no order to sleep, but the adults are tired. It's typically ten or half ten at this point. We can't be bothered with anything else. We need peace: just to read, surf, watch TV series, drink water, relax. So we are neither exciting nor precisely available. It's not a teacher's trick. It's just how it is.

When all three kids are in bed, I give them a short therapeutic foot massage with a homemade ointment made with etheric oils. Storm enjoys something quiet, spiritual, and relaxed. Silke has some oregano and copaiba to fight against an irritating skin condition, and Fjord typically has some Thieve or lavender (Thieves to boost his immune system). The little guy has a hard time in the winter. Lavender just because it is good. If my husband is lucky and quick enough, he also gets a foot massage.
Being tired and present
Our oldest son is always the first one ready. He is very systematic, so he has usually been lying in bed for half an hour listening to an audiobook before the room becomes totally quiet.

Sometimes our kids need to talk about something, sometimes there's a goodnight song, but usually, it just happens that the day comes to a close (for everyone). It is dark and cold (the season); everyone is tired, finds their peace, and finally lies down to sleep. The adults are awake until the children are sleeping. It's like a part of the parents-responsibility-package -but otherwise, there are no rules.

While they sleep, my spouse and I have a little chat and potter about our own things. I read or watch documentaries, spread the cream on my feet, knit, maybe stand up and clean the kitchen, start the washing machine or dryer, chat with my teenage daughter (if she is home and awake). I take a breath.

Finished. Boom. Or not. In reality, there isn't anyone that sleeps all the way through. The dog blocks about eighty percent of the blanket I share with Fjord, and we fight over it a few times during the night. I throw a hand on her stomach, give her a little fuss, and a calm voice. Silke, as a rule, wakes up around 2 am for some water or to take the blanket on/off, then she goes back to sleep. Storm often wakes up, but he sorts himself out. He is a big lad. Sometimes he needs to move around, chat, or have a cuddle; then, he goes back to sleep.

In the morning, we wake up. Storm first, well before the rest of us. Well, first of all, My husband, the everyday hero who goes to work. Then the teen, Liv, goes to school. Then storm and a few hours later, Silke, Fjord. I make the first espresso around 9 am, and off we go. Nice and easy.

May the sun shine on you

NB! This article is some years old and our habits change over time - so just remember everything you read on my blog is a snap-shot of where we where in our life at the time the article was written :)

There are no comments yet. Be the first one to leave a comment!

Here you can see the latest blogpost. Want more content? Just check the blog link in the menu :)

The secret to good planning

A conversation about world schooling

Chateau Jasmine and how to handle big dreams

Or sign up to our newsletter.
We rarely send emails and you can unsubscribe at any time.